You are here: Home » Destinations » Romania 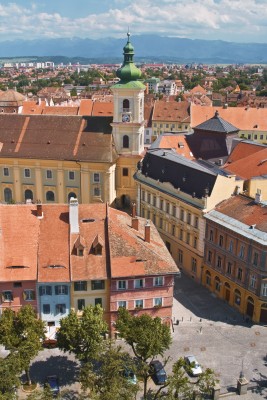 Transylvania Cityscape, Romania
Travelling in Romania, the EUâ€™s newest member, is like being somewhere between an eternal Halloween and the Led Zeppelin IV cover that features a twig-carrying farmer. Even in cities where Audis zoom across highways under video-camera speed traps, Romanian life is defined by its sweet country heart. Most anywhere, youâ€™ll spot horse-drawn buggies crossing the (often cratered) paved roads â€“ up green mountains, past cone-shaped haystacks and herds of sheep â€“ which bounce along as if the roads themselves are aliens to the land. And then thereâ€™s that Dracula thing. Many visitors, lured by bloodcurdling tales, make full trips out of Transylvaniaâ€™s castles and lovely medieval Saxon towns like SighiÅŸoara, where the â€˜real Draculaâ€™ (Vlad Å¢epeÅŸ) first grew his teeth.
But travellers limiting themselves to chasing vampires will miss so much. The capital, Bucharest, has its critics, but the blend of grotesque communist monuments and purposefully hidden-away cathedrals makes for fascinating exploring. Excellent hiking, biking and skiing are found all over the Transylvanian Alps (aka the Carpathian Mountains), which curl across central Romania. Farmhouse B&Bs allow guests to soak up some village life, particularly in the bucolic paradises of MaramureÅŸ and Southern Bucovina, where cemeteries and monasteries are painted as boldly as pop-art paintings.
Romaniaâ€™s neighbour Moldova â€“ a trickier place to visit, but equally as fascinating â€“ is no closer to EU consideration than when the Soviet Union collapsed, largely because it lives on as if this had never happened. Russian is spoken commonly here and its renegade province, Transdniestr, still supports a communist government. Adding a few days in this Cold War timewarp on a trip to Romaniaâ€™s vampire trails and Alp-like ski runs easily makes up one of Europeâ€™s most interesting, and least understood, destinations. Go now, before it changes.
Sorry!
We don't currently have any trips departing for Romania. Check back soon!
↑ Return to Top - Contact Us - F.A.Q. - Coach Operators - Group Bookings - Hotels - Attractions - Sitemap - Home
© CoachBookings.com 2022 - Company no. 5808080 - Privacy Policy - GDPR Compliance - Terms & Conditions
CoachBookings.com, 3 Burlington Road West, Blackpool, FY4 1NL, United Kingdom. 0845 33 11 080
Privacy Policy & Cookie Consent
CoachBookings.com uses cookies to improve your experience of the website and collect anonymized usage data.
Accept Policy Learn More