You are here: Home » Destinations » Namibia 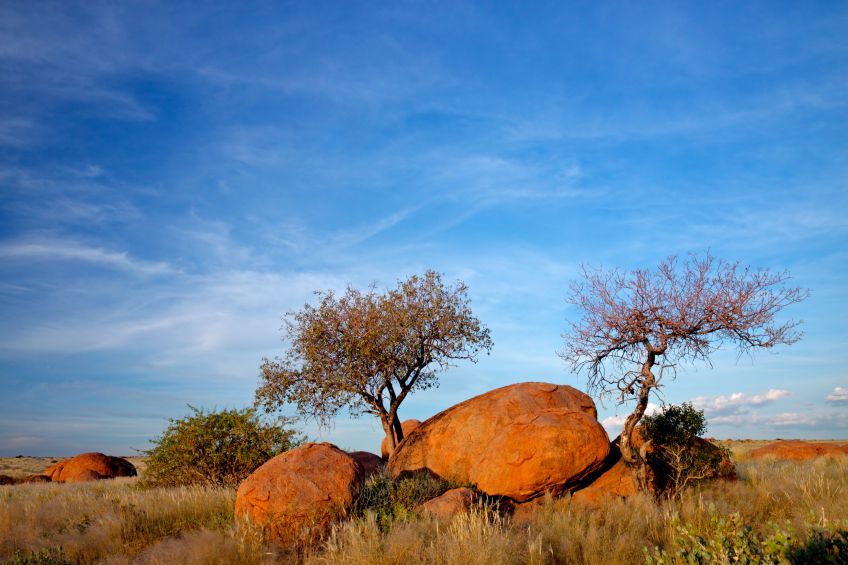 Namibia
Namibia is a country of compelling beauty, abundant sunshine, and a feeling of unconfined space. With its unspoilt landscapes and large variety of game, Namibia is one of the larger countries in Africa, and draws an increasing number of visitors from various parts of the globe.
A sense of freedom is generated by the wide horizons, the clear unpolluted skies and a population density which is among the lowest in the world. This feeling of tranquillity and stillness combines with a landscape which is singular in it's colours, full of contrasts of light and shade. In addition, the diversity of it's people creates a rich blend of cultures and traditions. The population is composed of several different ethnic groups, including the San, the Khoi-Khoi, the Herero, and the Ovambo as well as the small European population, largely Germans and Afrikaners.
Namibia has a colourful and turbulent history. In the mid-19th century, German missionaries opened up the interior, paving the way for traders who came later. The annexation of the country by Germany in 1884 accounts for the distinctive German architecture and traditions. As a nation, however, Namibia is relatively young, having gained its independence after prolonged struggles only in March of 1990.
It gets quite hot between December to February, but because of its high altitude, humidity is low and nights are pleasantly cooled by a light breeze. It does rain quite heavily in summer but the evaporation rate is extremely high so it does not stay damp for long. Winters can get very cold at night with some frost in low lying areas, but the days are warm, sunny and cloudless.
Namibia is the first country in the world to include protection of the environment and sustainable utilisation of wildlife in its constitution. About 15,5% of the country has been set aside as National Parks. In these areas, rare and endangered species of animals, birds and plant life are preserved and protected. Most of the African game species are well represented in Namibia, with the largest concentration in the Etosha National Park. Wilderness and modern amenities co-exist happily in this land of vivid contrasts.
Sorry!
We don't currently have any trips departing for Namibia. Check back soon!
↑ Return to Top - Contact Us - F.A.Q. - Coach Operators - Group Bookings - Hotels - Attractions - Sitemap - Home
© CoachBookings.com 2023 - Company no. 5808080 - Privacy Policy - GDPR Compliance - Terms & Conditions
CoachBookings.com, 3 Burlington Road West, Blackpool, FY4 1NL, United Kingdom. 0345 33 11 080
Privacy Policy & Cookie Consent
CoachBookings.com uses cookies to improve your experience of the website and collect anonymized usage data.
Accept Policy Learn More