You are here: Home » Destinations » Jordan 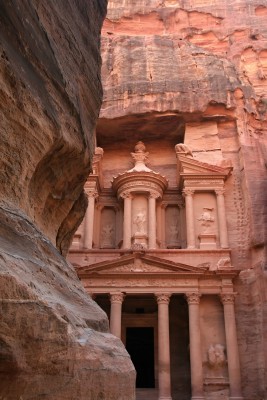 The Treasure House, Petra
It is probably fair to say that many travellersâ€™ expectations of Jordan are somewhat narrow. In fact, Petra and Indiana Jones wouldnâ€™t be too wide of the mark! But, of course, even for a hastily formed preconception, this view is blinkered in the extreme.
The sights of the capital, Amman, are quite well hidden, and many leave the city without truly exploring whatâ€™s on offer. But the gargantuan remains of the Roman Amphitheatre, along with the equally impressive Citadel, nearby, thoroughly reward investigation.
Away from Amman, Jordan unveils itself as a place of breathtaking natural beauty. To the south, the landscape is dominated by towering red sandstone cliff faces; to the north, meanwhile, mile after mile of olive-tree strewn hills stretch away.
Somewhere between the two, the remarkable Dead Sea emerges. Situated at the earthâ€™s lowest point, and with around eight times the salt content of normal sea waters, the Dead Sea is famous for its unusual buoyancy, allowing people to float easily on the waterâ€™s surface.
The Jordan Valley stumbles into the Dead Sea and makes for wonderful (if at times somewhat hot) hiking. Elsewhere, the Eastern Desert contains plenty of impressive castles just waiting to be explored, while near Irbid lies the Roman settlement of Umm Quais.
Alternatively, head south from the Dead Sea and seek out the mind-boggling feat of human endeavor that is the city of Petra. Once the capital of the colossal Nabataean kingdom, Petra now stands, dug into a cliff face, as one of the most breathtaking sights in the world.
Sorry!
We don't currently have any trips departing for Jordan. Check back soon!
↑ Return to Top - Contact Us - F.A.Q. - Coach Operators - Group Bookings - Hotels - Attractions - Sitemap - Home
© CoachBookings.com 2021 - Company no. 5808080 - Privacy Policy - GDPR Compliance - Terms & Conditions
CoachBookings.com, 3 Burlington Road West, Blackpool, FY4 1NL, United Kingdom. 0845 33 11 080
Privacy Policy & Cookie Consent
CoachBookings.com uses cookies to improve your experience of the website and collect anonymized usage data.
Accept Policy Learn More