You are here: Home » Destinations » Glenshee 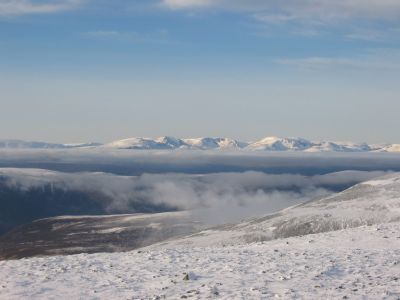 Glenshee
The name Glenshee means `the fairy glen`, although the wild mountainous terrain and winter weather here would make it difficult for even fairies to survive in comfort!
The glen stretches north from Bridge of Cally becoming progressively more dramatic; fertile farmland gives way to rolling hills and, at the head of the glen, some of the highest mountains in Perthshire crowd in to form a rugged landscape. The road up through Glenshee to Royal Deeside is the highest main road in Britain and was once one of the most notorious with the feared Devil's Elbow and its 1 in 3 gradient. Today the route has been greatly upgraded and forms part of the Deeside Tourist Route, a popular through route from Perth to Aberdeen.

Mountains in the area include The Cairnwell, Cam a Gheoidh, Glas Tulaichean, Carn an Righ, Beinn Iutham Mhor. These fine Munros (mountains over 3000ft) are located in wild hill country and can be accessed from the far north west of the glen. Glas Maol and Creag Leacach are two further Munros to the east of upper Glenshee, linked by a lovely, gently winding ridge they provide a high level promenade with superb views. Sharp-eyed walkers may catch a glimpse of wild red deer herds or an eagle soaring overhead.