You are here: Home » Destinations » Galapagos 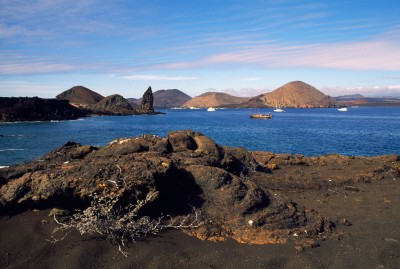 Galapagos Islands
To discover the Galapagos Islands is to discover nature in its purest state. So pure, in fact, that it led the young English naturalist Charles Darwin, who visited the islands in 1835, to write "The Origin of the Species"... and the world has not been the same since.
Located 1,000 Km. off Ecuador's Pacific coast, this mysterious and fascinating archipelago is comprised of 13 large islands, six smaller ones and over 40 islets. Together they cover 7,500 sq. Km. Most are south of the Equator where several marine currents converge. Thus, all of the elements were in place to create this zoological, geological and botanical wonder.
Through the evolutionary process, climate, ocean currents and the comparative lack of predatory enemies Â­including manÂ­ the Galapagos became one of the strangest and most compelling places on our planet. Flora and fauna, arriving on different "routes" across the waters from the mainland, colonized the original Galapagos lava beds.
The organisms which survived evolved to constitute species unique to the world. All of the Galapagos reptiles, half of the birds, 32% of the plants and 25% of the fish, as well as many of the invertebrates, are found only in the archipelago.
GalÃ¡pagos
The terrestrial and marine environments in Galapagos create a multiplicity of attractive and unique landscapes which have captivated generation of tourists and scientists. Giant tortoise, marine and land iguanas and lava lizards constitute the most spectacular reptile group found anywhere.
Birds are represented by more than 13 species of varying finches and also by flightless cormorants, small penguins, sparrow hawks, flamingos, albatrosses and boobies, among others, Mammals found there include beautiful and playful seals and dolphins.
It is for all of these reasons, and many others, that UNESCO declared the Galapagos Islands a Natural Heritage of Mankind site.
Sorry!
We don't currently have any trips departing for Galapagos. Check back soon!
↑ Return to Top - Contact Us - F.A.Q. - Coach Operators - Group Bookings - Hotels - Attractions - Sitemap - Home
© CoachBookings.com 2021 - Company no. 5808080 - Privacy Policy - GDPR Compliance - Terms & Conditions
CoachBookings.com, 3 Burlington Road West, Blackpool, FY4 1NL, United Kingdom. 0845 33 11 080
Privacy Policy & Cookie Consent
CoachBookings.com uses cookies to improve your experience of the website and collect anonymized usage data.
Accept Policy Learn More